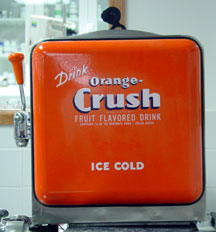 The druggist would make their own syrup and would “squirt” some into a glass and add carbonated water and phosphate. Every single drink served would be made basically from scratch. The drugstore soda dispenser appeared on the scene and changed everything. 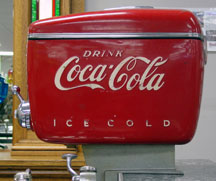 Eventually companies pre-made the syrup there-by freeing up the druggist to do other things. Companies like Coke, Hires, Pepsi and Orange Crush also made soda dispensers that could easily be bolted to the existing soda fountain and would mix the syrup and carbonated water simultaneously thus eliminating several steps. The druggist no longer had to “squirt” syrup. He simply had to hold the glass under the spigot and turn the handle to fill a glass of soda. 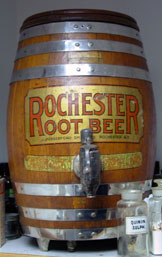 Soda Pop Companies and the Demise of the Soda Fountain

The soda companies would make an agreement with the druggist so there would be no up-front cost for these proprietary soda dispensers. The druggist now had more free time but he lost some of his uniqueness since a patron could go to any drugstore and get the same drink. As wonderful as these soda dispensers were they hastened the demise of the soda fountain. They contributed to the homogenization of drugstores. Eventually these sodas were bottled and sold in grocery stores and gas stations. Soda was available everywhere and people didn’t need to go to the drugstore to buy them.

The historic soda dispenser was a great advertisement for the soda companies. They proudly sat on top of the soda fountain at eye level and advertised their brand to potential customers. Most people tasted their first soda at the drugstore and it built brand loyalty. So when the time to bottle and mass market arrived the brands were already recognizable and desired.